Congrats to Mark Hartenbach, Alien Buddha Press artist of the month for October 2018. Mark has been a very prolific figure in the small presses for many years. The following are a few tributes to Mark written by myself and others that were included in his book with ABP entitled Surfing the Appalachian Vortex.” Also included in this post is an interview I had a chance to conduct with Mark as well as a few samples of his work.
Introduction by Jay Miner
It’s odd sometimes how things work out. Over twenty years ago Mike Basinski at the University at Buffalo Poetry Collection sent me some of Mark Hartenbach’s material and I have been a staunch admirer ever since.
Recently, after continuing to be absolutely floored by online postings of his work, I implored Mark to put out a new collection of poetry. When Mark stated that he had no publisher at the time, Ron Androla suggested that I do it myself.
In my mind Mark Hartenbach’s writing is the antithesis to what I refer to as “candy ass poetry.” It jumps off the page and has the ability to change and damage you like staring endlessly into the unforgiving sun. I don’t recall another writer that has ever been able to so adequately capture for me feelings of beauty, darkness, mania, and rage and often at the same time.
Mark does not like bios per se, so let me just mention and thank for him the following: Louisiana Review, Rio Grande Review, The Temple, Black Moon, Kiosk, Owen Wister Review, Chiron Review, Bullhead, Concrete Wolf, Birmingham Poetry Review, Fuel, Welter, Cantos, Wormwood Review, Lilliput Review, the Hold, Thunder Sandwich, Pudding House Publications, Hcolm Press, and Oneiros Books.

Out here in the forgotten lands, the rust belts & the hillbilly hells, poets still rule the earth. Poets born to nothing, made of brain, brawn & vision. Determined. Mark Hartenbach is nothing if not determined & beautiful.
Lonnie Sherman

Many years gone by, Jen Bosveld of Pudding House Press introduced me to Mark Hartenbach by sending me a handful of his poems and his email address. She knew it was unnecessary to say more. Penetrating and unique are two words that come to mind, but they’re hardly sufficient to capture the in-depth honesty and insight of Hartenbach’s writing. I immediately contacted him and asked if he had a book needed publishing. He did, and in short order Hcolom Press published The Sound of Music.
Poets of this caliber come along very seldom.
John Bennett
Mark(o) Hartenbach is an undulating jazz ensemble. It is his world, the word of wailing riffs across time signatures uniquely his own; each keyboard clicks a thundercloud of epiphany. Marko has persevered as the anonymous horseman; spokesman for the end of the line with overtones of the great struggle of the individual facing murky tomorrows. It is a demanding emotional journey deserving more than a side-stepped two dimensional glance into history. Marko’s words sit in parallel reflection of his environs, via unmistakable rich diction, and delightful, abstract imagery, which composes his song of the wild, this solely Appalachian story, which not ironically could speak for so many others. For to Marko, it is not the place but the humanity, the faith in infinity that is the universe that is his word. Chords of a generation slipping into the next, captured here, hum and hiss vinyl in an age of digitized blankness. Marko Hartenbach is the meandering note of all scales and sweet roses. He is blackest of nights and bleakest of times. Marko is simply an American masterpiece in his own right. The words within will leave no doubt, Marko Hartenbach is a raconteur of no equal.
Danny Baker

Mark Hartenbach’s poetry explores & exposes the deepest interiors of his majestic soul. What the holy fuck. We should ALL be bowing in the direction of East Liverpool, Ohio. Mark is an honest, introspective, real, magical god of the poem. Before you experience Mr. Hartenbach’s intense, powerful poems, BOW, baby, BOW. After you read his unique confessions, after you’ve caught yr breath, BOW AGAIN, BOW AGAIN, & be amazed. Listen up, whoever the fuckwad holding this book is. Mark Hartenbach poetry! Jay Miner photography! Yes, I did, indeed, call you a fuckwad. Buy, read, experience, & hopefully you might transcend fuckwadism because of this book. It’s actually the only way to evolve.
Ron Androla

Mark Hartenbach is an American master, an original. A poetic virtuoso and irrepressible genius, he is the applied philosophy of the working class main lining language in a mind-bending river straight from the hearts of his Appalachian roots.
S.A. Griffin
if something is beautiful

You’ve been at it for a long time Mark. Do you recall roughly when you started writing and what the circumstances were that led up to that? What inspires you to write and what kind of themes do you tend to draw from?
i remember specifically the turning point. i was living w/my girlfriend in cleveland OH. one day i found some books among her belongings. one of them was kerouac’s on the road. my thinking to that point had been cloudy because of alcohol/chemicals/general apathy. i also discovered kesey’s ‘one flew over the cuckoo’s nest’ & hunter s. thompson at the same time. of course it took a few years before my desire to write something other than songs became galvanized. i began writing poetry/fiction. of course it took some time before i found my own voice.

I’ve always felt that most of your work is pretty dark, but I like that. There’s a certain urgent beauty to the poignancy in a lot of your writing. Can you speak to that?
thanks man. i think that’s a fair assessment of what i do. i don’t purposely go to some dark place when writing. by the same token i don’t create much in a particularly happy head. sometimes i have to reel in my mania & call out my depression. that sounds vague but i can’t think of a better explanation. i usually write in the morning before my head becomes cluttered. i also require pain medication & lots of coffee.

I’ve always considered you to be quite a multi-faceted artist. From poetry to visual art to music. I know you’re still writing and doing your drawings, are you still playing the guitar and writing songs at all? I see a connection between your visual work and your writing, do you think there are any major differences in where you are coming from as an artist when you are dabbling in the different mediums or is it all pretty consistent?
i haven’t thought much about what exactly pricks the muse. maybe i’m afraid to delve deeper because i think the muse doesn’t stand for that kind of hardcore examination. i can no longer fingerpick guitar because of arthritis in my hand. i played mostly w/my fingers before. now i can strum w/my thumb. that’s about it. occasionally i write songs. haven’t been doing much drawing/painting lately.

What else can we expect from you in the near future?
for my next project i want to do book of short stories/novellas. i have a couple dozen. also i’d like to keep the proverbial wolves at bay. 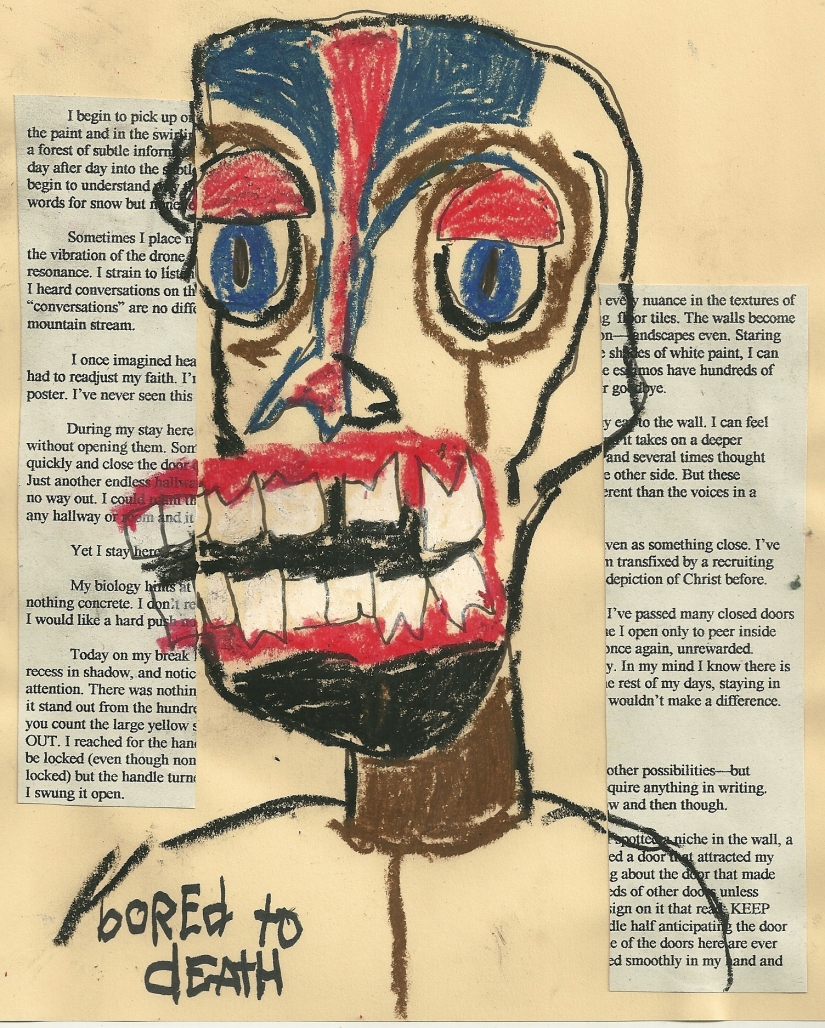