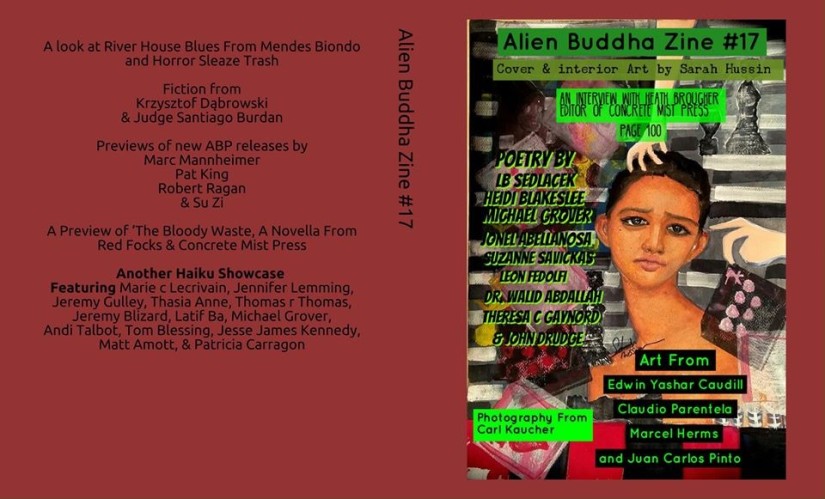 Here is the Press Crossover Interview

An Interview With Heath Brougher,

ABP- Thank you for taking this interview, Heath.  I am sure that the Alien Buddha Zine readers and contributors alike would love to know more about your press. First off, when did Concrete Mist Press first launch? What was your first release?

HB- Thank you for the question and thanks to Alien Buddha Zine for having me as this issue’s interviewee. Concrete Mist Press was born out of me wanting to start a press so I could use what I had learned about publishing to help out writers/poets who the mainstream wasn’t recognizing because they committed the cardinal sin of coloring outside the lines. CMP was initially intended to, for the most part, give great and innovative writers a chance to finally have their voices heard. I was expecting to be publishing a lot of people for the very first time. However, I was not expecting the major response I received when I announced the “birth” of the press on FB. Suddenly, some of the greatest writers in the world wanted me to publish their work. I couldn’t say “No” to them since there are presses that would KILL to be able to publish a book by them.  The very first book to be published by Concrete Mist Press was by this guy named Red Focks (lol!) titled “The Abandon.” It is a really brilliant book and I also learned a lot about the whole publishing process from working with him. I’m very grateful.

ABP- What can you tell us about Alan Britt’s, “Gunpowder for Single-Ball Poems”?

HB– I can tell you that, as I write this, it is still not released. Lol!! I personally think this may be his book Britt’s Masterpiece so we are taking it VERY SLOWLY concerning both the inner and outer aspects of it. I will say two things about it: it is worthy of the Pulitzer Prize and I WILL pay the 84 dollars to get it in the running. Also, its cover art is the coolest cover art I’ve ever seen. I CANNOT wait for everyone to see and read this book!

ABP- How about “Today is a Michigan Ghost Town” by Matt Borczon?

HB- This is ANOTHER book I’m very excited about publishing because a lot of people think they have Borczon’s writing style pegged down and this book is just going to shatter every preconceived notion they have about Borczon or any other writer they think they have “pigeonholed” for that matter.

ABP- and what can you say about “Ghosts of the War Elephants” by Catfish McDaris?

HB– Amazing book!! I learned A LOT about the literary world in the process of publishing this book. Things tend to run pretty smoothly when you’re being fed advice from Catfish McDaris. So, between him and Borczon and Britt and Young and Focks, I have learned A TON about publishing WHILE publishing books from poets/writers of their caliber. I’m extremely grateful for the opportunity and that’s something I cannot stress enough. As far as “Ghosts of the War Elephants” by Catfish McDaris goes, as I said, I learned A LOT from working with such a living legend as well as having the privilege of hearing some extremely interesting stories about Ginsberg, Burroughs, Bukowski (who he wrote a book with), and even Hendrix if you want to get into people outside the literary world.. He even sent and showed me books and pics of some extremely limited-edition publications from those authors and even a full on facsimile of Bukowski’s poems and notes on poems. If you would’ve told me I’d be reading such a thing 5 ½ years ago I would’ve laughed in your face. Lol! So, obviously, I was beyond grateful for that entire opportunity. I’ve learned even more as I’ve gone along from some extremely brilliant writers who have been around the block just like Catfish McDaris and know what they’re talking about. So “Ghosts of the War Elephants” was the 2nd book published by Concrete Mist on July 8th, 2019.

ABP- Tell us about the CMP anthology

HB-It spent 3 days at number 1 on Amazon for Best Selling Books—in the Anthology category of course. I’m extremely proud of it. I tried to make it feel as “jagged” as possible; as if you were literally walking through a “concrete mist.” Hence, “let your eyes bleed in the mist that swirls just ahead” which is part of the very short into I wrote for it. As far as that project goes/went, I definitely, as I do in the book, give a thanks to this guy I know named Red Focks as well as john compton.

ABP- Do you have any other projects that you would like to mention?

HB- Mark Young’s “turning to drones” is brilliant, just as all his books are, and I cannot believe I got the chance to publish one of them. That is currently available on Amazon.com. I also recently published CMP’s first novel titled “The Bloody Waste” by this awesome writer named Red Focks. I don’t know what I did or how I became so blessed as to have published nothing but pure brilliance with Concrete Mist Press. Must’ve been a saint in a past life or something. Lol!

ABP- Well, thank you again for taking this interview, Heath. Please take the following pages to share anything at all you would like with our readers. The floor is all yours

HB- I’ll end by saying that, as I write this, the Corvid-19 virus is growing exponentially in NYC and around the world. So, hopefully, by the time this is published this panic will have turned out to be exaggerated. If not—and, especially with a soulless, heartless Chump steering this ship, I hope that as many lives as possible will be saved. Also, I’d like to thank Alien Buddha Press for giving me this opportunity.

no frost on the grass

is no longer possible

Catching the fish of commerce

Where the money flows

Just before a rain

They know to store up

I crave peace and calm

this is my world

Live on in bellies

I won’t be awake

A woman kneels down

in a small art gallery

to tie my sneaker.

in our neighbors back yard

the dog resting in my lap

naked for a long winter

Fifteen minutes is too long

Turn off your T V.

Why is he talking?

My ears are crying.

Landing with a silent crash

On white beds of snow.

she smiles as I lie down