Inhaling—Storm clouds caught in my body

departed through my toes,

rainbows form in my bloodstream,

I smile with inner golden light.

Even in dark times, meditative moments

can bring about some inner bliss. 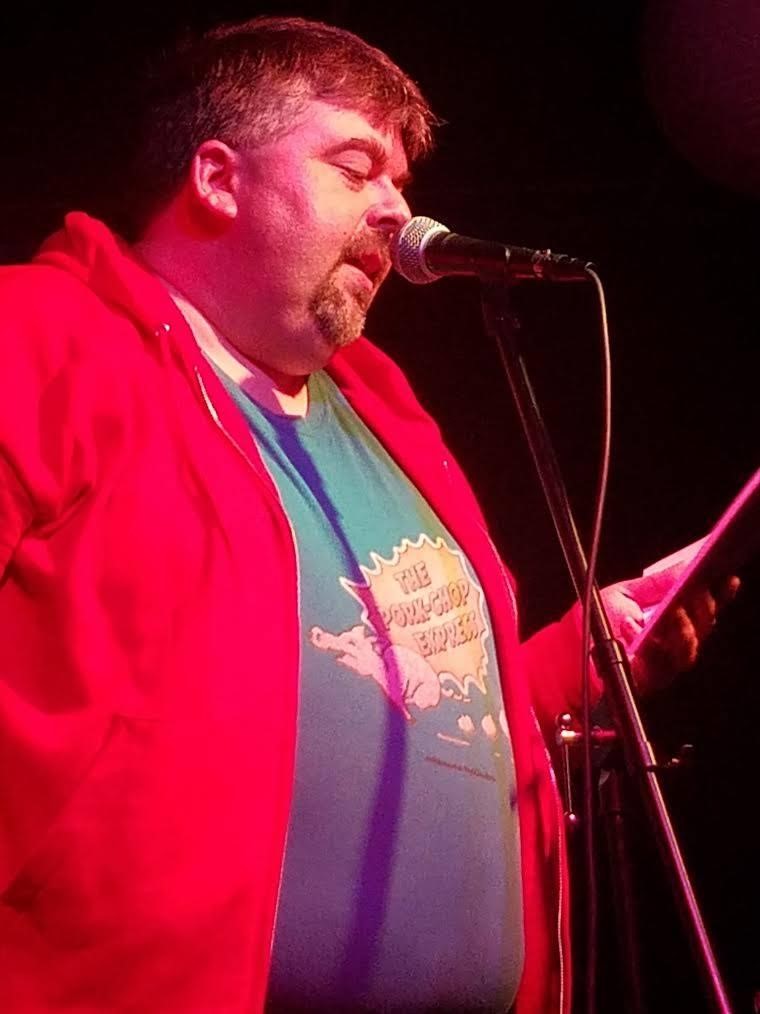 Raised on a rice and catfish farm in eastern Arkansas, CL Bledsoe is the author of more than twenty books, including the poetry collections Riceland, Trashcans in Love, and his newest, Grief Bacon, as well as the Necro-Files novel series and the flash fiction collection Ray’s Sea World. Bledsoe co-writes the humor blog How to Even, with Michael Gushue located here: https://medium.com/@howtoeven His own blow, Not Another TV Dad, is located here: https://medium.com/@clbledsoe He’s been published in hundreds of journals, newspapers, and websites that you’ve probably never heard of. Bledsoe lives in northern Virginia with his daughter.

The jerky movements of death—first

a crawl, then the off jump. No matter

how much I ride my bicycle into

the wind, it never takes me anywhere

but home. Which isn’t to say some

a house on me. The only little dog

I ever had, my dad shot one night,

drunk, thinking it was a skunk. I won’t

figured out not to bring any more home.

This is why I live alone, in more than

one sense. Today has been a fucking

nightmare. Yesterday was a fucking

of person who spends a lot of time talking

about the color of the stones being thrown

at me. I’m more inclined to duck out

of the way. It won’t matter. They find

you wherever you move, even if you

It wasn’t long ago an itching in the ear

meant death, which is fine as long as

everyone can go out for ice cream, after.

My neighbors have been stoned since

the birth of their baby, who I suppose

has been stoned, too. I can smell it

in everything, the little death to tide

them over. Nothing is anyone’s fault

unless they choose it to be, which is

another way of saying free will, which

falls away with a complex enough

investigation. I’m not supposed to say

I understand what it is to be away,

to wish to be away from every moment.

Bourbon is cheaper than a casket. These

days, weed grows in the streets. You

can see the cracks in the sidewalk

where it’s poked through.

When the bastard kept bumping up against

my windows, I flung the door open, went

around the side of the house, and told

the night I was going to kick its ass. Some

of us have jobs in the morning, I said, fists

already red. It didn’t have anything to say

to that, let me tell you. Just who do you think

you are, buster? I asked. And did it have

anything to say? All night, I’d been sitting

there, minding my own, while this jerk used

up all the light, made a mess of things—you

couldn’t even see the ground for all its sprawl.

We have to share this place, I said. I’m a

reasonable man. You just go away and never

come back and I won’t call the authorities.

schedule. I gave it a good, fierce glare

and waited for any response. When there wasn’t

any, I nodded, proud, and went back inside.

I slept like a babe, let me tell you. When

I opened my eyes in the morning, it was gone.

Things I’m Going To Do When I Can Do Things, in no particular order:

-Get a tattoo of Tattoo from Fantasy Island, probably not on my face.
-Train a squirrel to vacuum in a little French maid’s costume.
-Start going to the fancier Dollar Tree that’s a little further away.
-Buy all those funny tee shirts I’m always seeing advertised, then sweat in them a bunch and sell them to fetishists.
-Travel…to the couch to watch TV.
-Buy a new set of tires…and set them on fire right outside the door of my neighbor’s apartment the next time they play music too loud.
-Maybe buy some new socks.
-Invest in sex robots, which are clearly the future.
-Finally watch Gilmore Girls.
-Find happiness and contentment…probably on my couch. 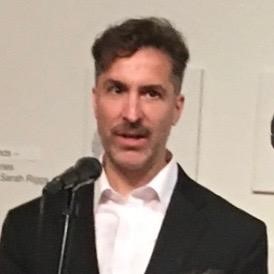 Drew Pisarra is one half of Saint Flashlight, a poetry activation project with Molly Gross. Their work has been featured at O, Miami Poetry Festival, Free Verse: Charleston Poetry Festival, and NYC’s Poets House. Individually, Pisarra had his first collection of sonnets, Infinity Standing Up, published last year by Capturing Fire Press. (The book received favorable reviews in The Washington Post, The Washington Times, and other publications.) He is a 2019 recipient of a literary grant from Cafe Royal Cultural Foundation.

Catching Breaths in A Journal of the Plague Year

We draw in death when we breathe, and therefore ’tis the hand of God; there is no withstanding it.

We breathed death in every place, and upon everybody who came near us; nay, our very clothes retained the infection, our hands would infect the things they touched, especially if they were warm and sweaty.

Some of us proposed that we should breathe hard upon warm water, and that we would leave an unusual scum…

We were content to live hardly, and only desired a little room to breathe…where it was wholesome; to breathe…after the noxious particles…were dispersed and burnt up.

Who durst smell to that breath for information?

There was no illness whatever amongst those who did not drink the milk.

Everyone drank the milk in those days.

The milk was cream.

A public luncheon was followed by severe and even fatal illness.

Dessert was not on the menu that night.

Coffee was a given.

The general symptoms of such meat poisoning are vomiting, diarrhœa, fever, and more or less prostration.

So what of the vaccine?

Where is the cure?

On the white of (a speckled) egg, it flourishes extremely well.

Shall we sit in our kitchen chairs by the window,

our feet on the floor, our just-washed hands in our laps?

Shall we watch masked neighbors, gloved-up and on the go,

then shut our eyes and take impromptu, seated naps?

Would you do this with me if I asked you, perhaps?

What a weird new era, this fear of contagion,

and so much unknown… Just think of the weather!

And yet I can see in the window’s reflection,

a glimpse of shared likeness. We’re in this together.

The mundane’s bizarre: the groceries, the cleaning,

the laundry, the cooking, the tax preparation,

the calls to my parents, the live Twitter streaming,

the morning shower, and the cruel liberation

from the nine to five. Communal agitation

hangs in mid-air as I rise from an unmade bed,

no longer hearing whatever it was you said

that lifted my mood last night. What was it? No trace

of that insight remains. I’m here thinking instead

how my place looks the same but now it’s outer space.

The front-door’s shut ‘though the bolt’s not locked.

That one opened window lets in no air.

which might sound nasty but I ask: “Who cares?”

a weird in-between where we’re forced to search

for friendship (and more) on the telephone

which sounds fairly awful but could be worse.

Sheltered In Place by Heather Pease

Heather Pease, believes herself to be a writer and poet. Better known as a fighter, a wise soul, and smart ass. Some would even say a funny chick, definitely a girl with a bite, and a goof. he recently published her first book of poetry ‘Out of the Weeds’ and has had work appear in the San Diego Poetry Annual. She lives in Southern California, sheltered in place with 2 cats and her family.

My world is she, they, and he

She is bold, a quick wit, smart but

would rather not flaunt it. Plays

games, both indoor and outdoor. Prefers

making aces and side outs to

being stuck inside. Wants to feel

the wind in her hair and let

laughter float away on a

breeze. She is soft, with a gentle

heart. I see myself in

They are quiet, reserved, wearing

their heart on their sleeve.

About to come of age. Excited for their first

(or not) drink. Art fills their world, as does

laughter. I melt in their eyes so

big and green. They wish they were back

on campus, with friends. They find

comfort in plants, tarot cards, and

watercolors. He is the love

of my life, a father full of unconditional

love. My husband, my lover, my friend. He makes

the entire room giggle, can make

fear go away with a hug or

a soft kiss. He is perfection, to

all of us. A man both gentle and

brave. Served our country, teaches, and

kicks about a ball. He has a surfer’s

soul and arms that make

me feel safe at home.

We met in space by Lia Nicole 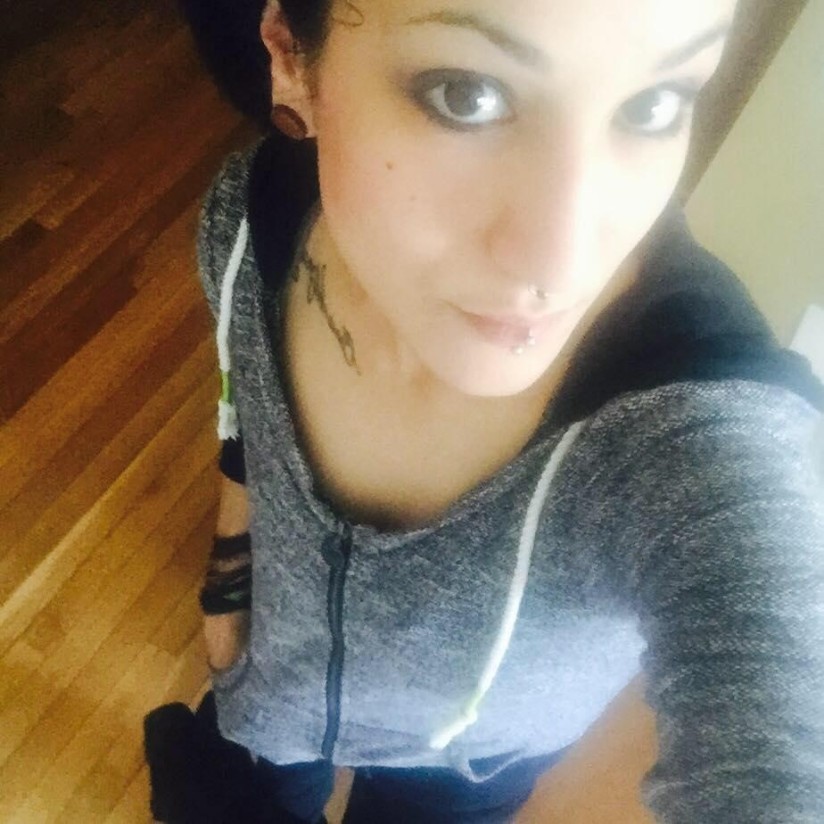 Lia Nicole is a school nurse and youth librarian living near Detroit, MI. She has enjoyed a lifelong love of all things literary, and is also fond of animals, art, music, coffee, and intelligence. An ethical vegan and feminist, she is often called a mom, daughter, sister, yogi, teacher, and friend. Lia is working towards a career change to full time librarian, and is looking forward to one day finishing that book… She lives with her daughter, some plants, and four fur-babies

What they called back then

Time and space, we transcended

I had waited my whole life

So we traversed the time waves

And then one day

The signs turned to open, and the virtual fell still

Just as the world

Had rested these long days

And to feel her for the first time

A birth and a death

An awake and a dream

Had collided into this one meeting

In a brand new space

Nurse (For Katie) by Winston Plowes

Winston Plowes shares his floating home in Calderdale UK with his seventeen-year-old cat, Sausage. He teaches creative writing in schools, universities and to local groups while she dreams of Mouseland. His latest collection, Tales from the Tachograph was published jointly with Gaia Holmes in 2018 by Calder Valley Poetry. http://www.winstonplowes.co.uk

Her small hands are experts at holding

at lifting people out of chairs

Her small hands are experts

at counting out pills

Her small hands are experts at catching falling leaves.

And over all those times

that she’s stood on the wobbly stool

in a life full of giving

at sticking fallen leaves back onto their trees –