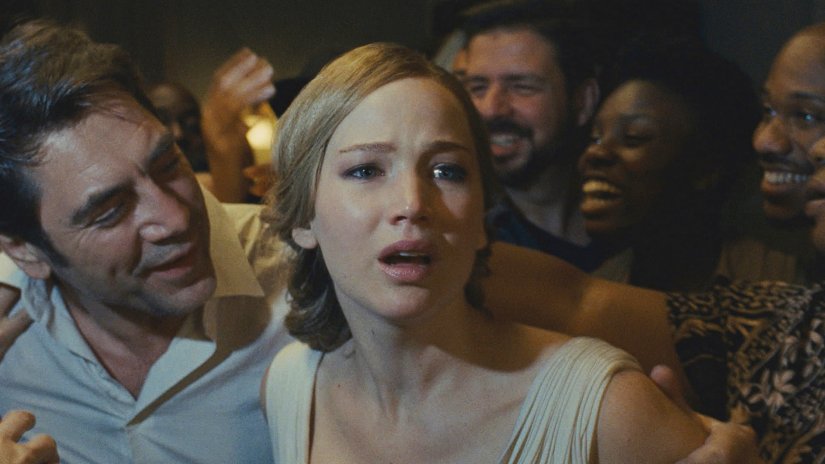 Written and Directed by Darren Aronofsky

Never before have I been made so uncomfortable by a film that I could not turn off. Just to be clear I did not like this movie. It made me very upset, and after watching it I could not sleep, nor could I refrain myself from running the plot over and over in my head. My high rating for this film is me simply giving the devil (Aronofsky) his due. The writer/director taps into a place in the human psyche that is unmentionable; and into a world where we all visit, but can never remember.

My own specific mental defects may have made me extra susceptible. The movie seemed to know exactly what scares me, what stresses me out, and what makes me feel out-of-place. I felt violated, as if Mother! was pulled directly from a lucid stress-nightmare that I would have in the middle of the day, while taking a nap in a bed without a sheet on the mattress, after drinking coffee and energy drinks all morning, and not sleeping the night before. The main characters, portrayed by Lawrence and Bardem are are infuriating; but not in the classic “what an idiot” horror movie way. The characters seem to be products of the nightmare, unable to communicate with each other, or stop themselves from exasperating the hell  unfolding around them.  Essentially, the lack-of-control that is felt throughout the film is what makes it so difficult. Lawrence is tortured the whole way through as a young woman who in unable to stop her husband from inviting more and more increasingly malevolent ghost-like strangers into their home. Some of the strange personal space invaders refer to Lawrence character as “The Inspiration”. She starts off as kind and sympathetic to her guests, but any time she pushes back against any sort of annoyance, the strange people push her back harder, taunting her into further insanity.

Bardem’s character is named “The Poet” by his strange guests, and as the film progresses they begin to worship him like a god. While being the main antagonist in this story against his wife, The Poet also seems to be completely out of control, like he is caught in a dream where he is not himself and all of his decisions are predetermined.

Above the subtle things about this movie that made me personally feel so helpless, it is also obvious that other themes are presented here. The relationship between men and women; the relationship between humans and nature. One might say that another word for control is power.  It’s the unreasonably powerful against the helplessly powerless.

Throughout the first couple acts the audience will ask themselves “Is this a dream?” “Are these people ghosts?” “Is it even possible that this is straight forward?”. By the beginning of the third act, one can only hope that the latter is not the case.

In conclusion, this is not a movie that I would ever watch again; but it was so weird, and personal, and powerful that it deserves to be recognized as brilliant.